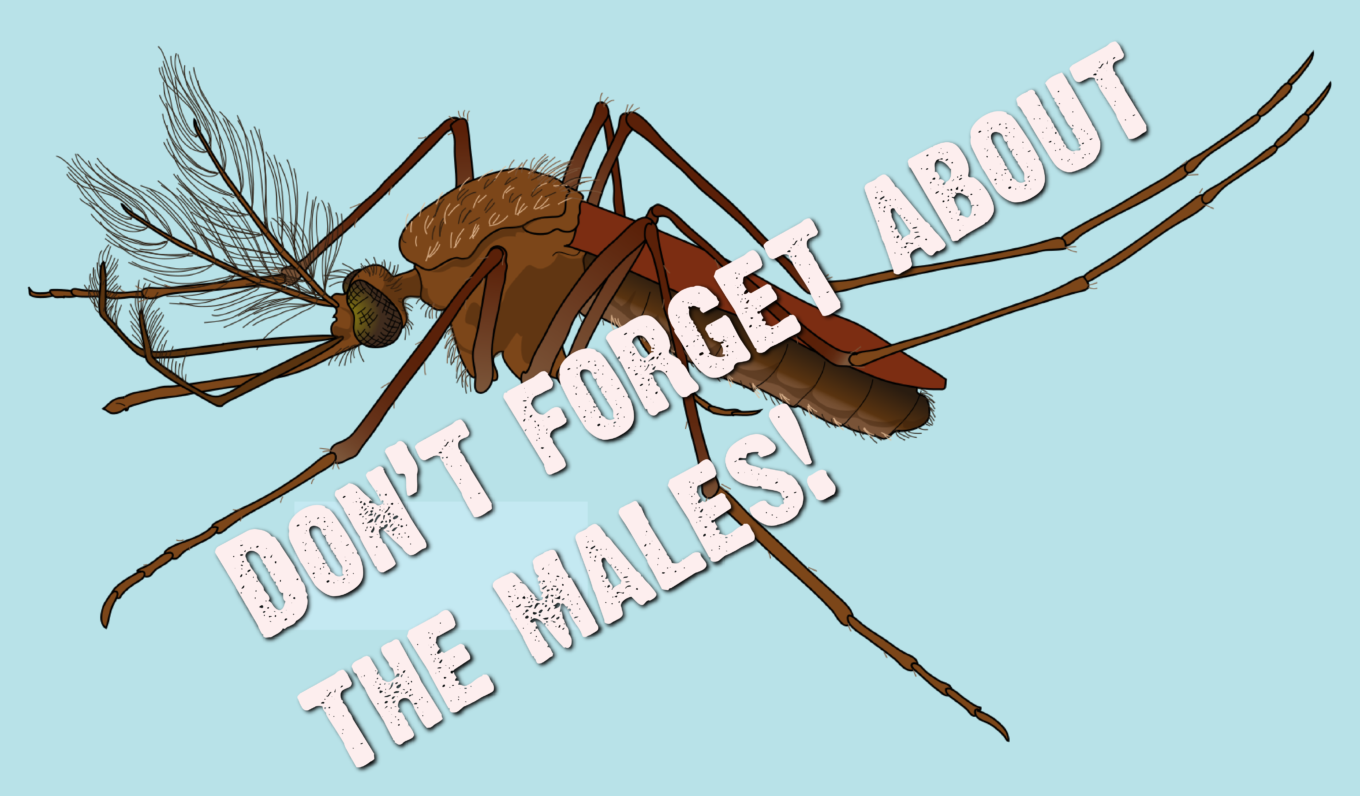 Why have male mosquitoes been left out of research?

Historically, research and vector control programmes involving mosquito vectors have focused on female mosquitoes due to their role in the transmission of vector-borne diseases such as malaria, yellow fever, dengue and Zika. In layman’s terms, as only female mosquitoes feed on blood and transmit diseases, most of the research conducted has focused on the female mosquitoes. A lot of research has been conducted with the common goal of finding suitable ways of controlling mosquito populations and controlling the transmission of vector-borne diseases. Consequently, little was known about the behaviour and ecology of male mosquitoes1.

Why the sudden interest?

With the rise in insecticide resistance, prophylaxis resistance and recent epidemics of mosquito-borne diseases there is a need for additional viable mosquito control methods. In recent years, researcher’s interests have shifted towards male ecology because of the potential that male-based genetic vector control techniques offer. One of the most promising techniques is the male-based sterile insect technique (SIT), where large numbers of sterile male mosquitoes are released into the wild to compete with the males that the females would naturally mate with2. This vector control technique relies on females mating with sterile males and reducing the reproductive potential of populations in the wild. As the sterilized males mate with the wild females, they are unable to produce viable offspring, which results in less mosquitoes in the subsequent populations.

The SIT is not a new technique and has previously been tested successfully on many pest insects including the Mediterranean fruit fly (Ceratitis capitata)3. Between 1960–1980, SIT release programmes were carried out on a small scale in different parts of the world on different mosquito species. These programmes have had a range of outcomes but several lessons were learnt and the development of new technologies has made researchers more hopeful for future release programmes. Recent programmes have been conducted on various species including the mass release of Aedes albopictus pupae over a five year period that demonstrated how populations can be suppressed2.

Pros and cons of SIT

SIT can involve the sterilization of mosquitoes through irradiation procedures, so it does not involve chemicals being released into the environment. The species specificity of SIT also reduces the risk of other species being inadvertently affected by this control method4. The largest indirect impact would be the resulting effects of suppressing or removing a mosquito species from an ecosystem. SIT through this method provides an alternative to the release of genetically modified organisms, which may be considered unfavourable due to public and government opinions in some countries2.

The benefits of targeting one species can also be seen as limitations as only one vector species at a time is controlled. For this reason, SIT programmes work best in areas where there are one or two predominant vectors. This is why work has been focused on Aedes species as Ae. aegypti is the primary vector of dengue worldwide, and two other species are involved in the transmission of other pathogens – Ae. albopictus was responsible for localized chikungunya outbreaks in 2005-2007 and Ae. polynesiensis transmits Wucheria bancrofti in Polynesia4. Where there are multiple target species that share behavioural characteristics and are competent vectors, it is important that sterile males are released for each species or the effects of releasing sterilized males is reduced. The current processes needed to produce and release sterile males are labour intensive so efficient mechanisms are needed. Better way to monitor the success and progression of these programmes are also needed.

The SIT has regained interest and demand as a potential vector control mechanism worldwide. SIT provides a male-based vector control technique aimed at reducing vector populations in the field. There have been varying levels of success with this technique throughout the years but as technological advances are made so does the feasibility of mass release SIT programmes.